Difference between revisions of "Lord Oaks" 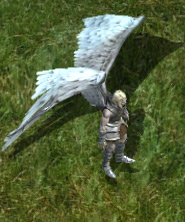 Lord Oaks is the defender of the forest. He is quick to strike down those that threaten the harmony of his domain and the creatures under his protection.

Lord Oaks is the "boss" monster of one of the various Champion Spawns that exist in UO.

In Ilshenar, the Lord Oaks spawn, properly referred to as the "Forest Lord," is located at the Spirituality Champion Spawn. In the Lost Lands/Felucca, the Forest Lord spawn is located in a clearing West and South of the location that one gets to through the Vesper Cemetery Passage.

Lord Oaks first spawns with Silvani, his "forest queen." The queen must be defeated first, or it will be extremely difficult to kill Oaks (he takes far, far less damage when she is alive).

Lord Oaks and the Twisted Glade Champion Spawn, are the only spawns which causes players to lose Karma.

Lord Oaks will take very little damage by any means while Silvani is alive. While it is possible to kill him without first killing Silvani, it will take a vast amount of time. Lord Oaks will ressurrect blue characters in the same way of an Ethereal Warrior. However, if you are blue with negative karma, he will most likely kill you upon ressurrection.

Lord Oaks' slayer vulnerability is Fey, which currently is only available on the Pixie Swatter artifact. On some shards, Animal Tamers with Alchemy and high Enhance Potions mod are used to quickly kill this boss.

The skull of Enlightenment, which upon Oaks' death is given to the player who dealt the highest amount of damage, is highly sought after. This skull is regarded as the ticket to the Harrower.

Lord Oaks is exclusively located in the Lost Lands of T2A, north of the Tortoise Champion Spawn area. Lord Oaks' also spawns in Ilshenar Spirituality, north of the moongate. The Ilshenar spawn, however, will not grant the skull of Enlightenment.

A very small number of Lord Oaks corpses will contain a Dirt Patch, a highly sought after rare item. Lord Oaks and the True Harrower are the only creatures known to drop this item as loot.

Retrieved from "http://www.uoguide.com/index.php?title=Lord_Oaks&oldid=61933"
Categories:
The Powerhour