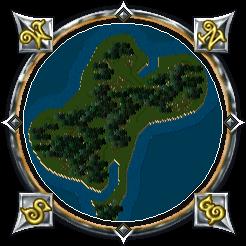 Inhabitants include all of the normal jungle fauna: corpsers, giant serpents, mongbats, snakes, and wisps. Additionally, gorillas and several wandering healers reside on the island.

Frankly, it is best reached by rune and Recall, Gate Travel, or Sacred Journey spells. However, if traveling by sea, travel due east from Jhelom.