An Ankh is a central image in Ultima lore and typically represents the Virtues collectively. It is also the symbol for the Virtue of Spirituality. Ankhs are similar in appearance to a Christian cross, but notably looped on top. Ankhs can be found in and on many items, buildings and locations, but are especially significant at Shrines.

At Shrines, such as shown in the picture below from Luna, you may Lock/Unlock Your Karma, Tithe Gold, or be Resurrected by using the contextual menu on the Ankh. 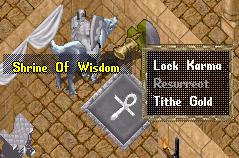 Origin adapted the symbol into the lore of Ultima beginning with the solo-player Ultima IV: Quest of the Avatar game. A metallic Ankh was included with the map and instruction manuals. On-screen, the Ankh was used in recording progress in obtaining avatarhood in the 8 Virtues. Once a Virtue was internalized and then meditated upon at the corresponding shrine, one eigth of an Ankh lighted-up in the statistics pannel. When Avatarhood was achieved in all eight virtues, then a complete Ankh was displayed. If a virtue was transgressed against, then its portion of the icon blinked out.