"The Artisan Festival" is a new Crafting event presented with Publish 95 to help introduce the new/expanded Bulk Order Deed (BOD) system to the players.

Give filled BODs to the Elf standing near a snowy patch within the designated city during a specific time period to help "grow" the holiday tree.

Anyone can turn in a filled BOD to the Elf at the Artisan Festival area, regardless of who crafted the items to fulfill the BOD. This allowed Crafters to give BODs to other characters/players. Each BOD is assigned a point value, which contributes to the total points necessary to make the holiday tree grow to its maximum stage. Per Kyronix: "The points listed on the BOD are a good measure of the value of the a BOD (including bonuses for exceptional/large). The amount of entries you get into the reward raffle are based on a fraction of these values (to keep things neater behind the scenes)." Stratics thread This raffle being the "random award" of gifts when checking the giant red bag on the 4th day of the cycle. If the tree is not fully developed, some people will not get a reward even if they contributed. 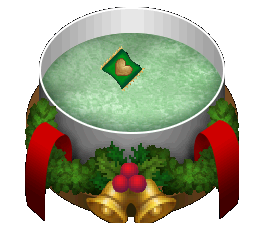 Players have 3-days to give the Elf Filled BODs which will contribute to the growth of the tree. At Shard-up on the 4th day, an "explosion" of presents will scatter over the area, and a giant red bag will appear. For the next 24 hours, anyone who contributed has a chance of receiving a gift by checking the giant red bag.

Once the Holiday Tree is done Rewards for this event are based on the Vice versus Virtue theme.