I spent quite some time trying to get out to the Dragon Claw Tavern. Having the Tavern on an island makes it harder to get to, but also keeps the thieves away.

The tavern is staffed by several guilds, so they have bar tenders there most of the time (or so I have heard, I'll keep checking :).

Well Aro warned me that the tavern would get full during peak evening hours, but to see it is to belive it. I popped in 3 different times through the evening. Not just the same people over and over, but many different people coming and going.

They are on the verge of forming a city out of the entire island. They have many buildings both small and large, and even a Castle.

The last time I visited was fairly late for EST, but there was a bar tender on duty. She told us there were over 10 standard bar tenders. They are all members of the Syndicat guild, and they tend bar rather than pay their guild dues. That is an interesting twist to running a good tavern. 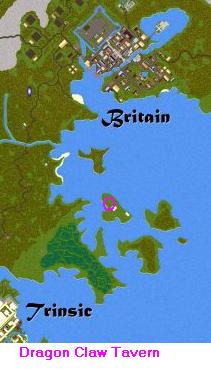