Seamus Finlay, archaeologist of the Vesper Museum, recently unearthed the "Bloodeye Cutlass" south of Skara Brae, on the mainland. The Bloodeye Cutlass once belonged to infamous pirate Captain Martin Bloodeye, and was long thought lost. Recent excavations by Seamus Finlay, and his brother Simon, led to the rediscovery of this notable relic.

Previous digs had unfortunately stirred up various Undead monsters, and this time was no different. Fortunately, local adventurers Darius, Ghazkull Thraka, and Tellute were on hand to assist the stalwart archaeologist, as seen in the accompanying artist's rendering of the scene (Bijoue, another assistant, was unavailable at the time of painting). Mr. Finlay was noted afterward as saying, "It was my good luck that those people were able to help. I know I wouldn't have been able to complete my work without them." 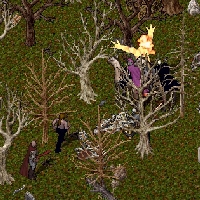 Mr. Finlay also noted that, with the halting of their digging, the Undead should no longer be disturbed and threaten the local populace as had occurred in the past 10 days. Farmers and other nearby residents have confirmed their relief, and will be returning to their normal business schedules.

The Bloodeye Cutlass is being transferred to the Vesper Museum for study, and eventual storage.