It seems that in the last few weeks there has been a sudden uncovering of gypsy activity. The gypsies are certainly not new to the world, yet before this they were always low key. There was the occasional rumor, but who could believe it? 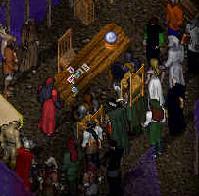 Now it seems that they are appearing and announcing their presence in many places. The first inkling that something was wrong came when strange creatures that are normally aggressive appeared in Yew, in Spiritwood, and in Nohkmahr. It seems that these very creatures were not creatures at all, but actually polymorphed gypsies of a clan, or rather clayn they call it, called Sear. If these were attacked, there were suddenly many more that swarmed the attackers. Warnings came to leave them alone, but few heeded them. More and more of this sort of activity has been occurring, and I have a report here that even the town of Britain has been affected.

A short time later, a gypsy wagon was noticed in the gypsy camp south and east of Minoc. No one knows how long it had been there, for it had a jaded and threadbare look about it. In the tent nearby there were the usual crystal ball and tarot cards, but there was also a vanity with wigs. It has been rumored that these gypsies are masters, or mistresses, of disguise. The trappings would seem to bear this out.

It was found later that the gypsy wagon belongs to a woman named Rilla Takhista. She told visitors that she was of the Clayn Aerie. Apparently, there is more than one of these clans existing here. Who would have thought it? Surely not me.

Who knows what the motives of this lass are? There is a strange story she has been telling. It seems that there is a book that has been lost. She will not say much about it, only that it contains information about these gypsies, and that someone named Maia seems to want to get it back. The good folk of Spiritwood have seen her a number of times, and it is rumored they are trying to assist her, as well as folk from throughout Britannia.

Rilla has said that when all four of the people needed are assembled; the bear, lion, wolf, and jackal, that somehow it will lead to the finding of this “book” she says has been lost. According to my sources in the gypsy camp, the last was found last night, and Rilla has met with them. Rumor has it that the search will begin soon for these books.

This week, an entire group of gypsies, their leaders clad in blue, attacked the town of Trinsic and removed considerable gold from there. Can we expect more town attacks? Their forces were led by a man named Kazari Wyndyar, and his bloodthirsty murdering apprentice, one Wynd Camardia. Who would have thought such bloodshed from a woman? Who says they are the “weaker sex”?

Rumors fly everywhere. A woman with black armor has been seen talking with the orcs. A girl in blue seems to be staying in the Yew Guard bastion. Maia is trying to gain the book for her own evil purposes. Rilla is not what she seems. Rumors? Something more? Dig deep, listener, for this one is a real puzzler.

One thing is for certain, we have not seen the last of these Gypsy “Clayns”. No crystal ball is needed to know there is trouble ahead!