We were vigilant. We were ready. The assault lead by Kazari could start any moment. We felt it in our bones. The air was sizzling with tension.

Suddenly it began. Not Kazari, but his brother Reynaud Wyndyar rampaged through Moonglow on the Trammel facet. With him, hundreds and hundreds of evil wizards in two distinct groups, identified by the color of their robes - scarlet or cobalt blue. We fought a terrible battle. Many died while Reynaud laughed at our effort, saying that his brother would capture Moonglow on the Felucca facet any moment now, and that we too would fall. We doubled our efforts as we grouped and moved in to kill the evil wizards who were butchering men, women and children alike. 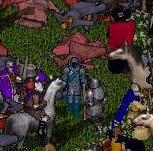 All of a sudden a group of brave heroes decided that Reynaud’s rampage had lasted long enough. They grouped together and surrounded Reynaud, battling with him in his fury until they finally wrested him to the ground, and placed him under arrest. With Reynaud arrested, the mages stopped attacking; without their general they made no move.

Reynaud was dragged deep into the Yew Prison and was locked away. While Reynaud was sobbing over his capture he yelled that his brother Kazari would free him, and that he would have all our heads. We laughed. Reynaud was locked safely away.

I rushed out to contact a guard about our prize capture. The guard quickly arrived at the Yew prison, stating that Reynaud would be put on trial for his crimes against the people of Moonglow.

He stated that the trial would take place on the 15th of November in the Judgement Hall within the Yew prison.

The guard appointed Yoldran, the mayor of Moonglow in charge of appointing a judge and forming a jury. We were very happy to see Reynaud Wyndyar away. It cannot be long before we defeat his brother, the vile Kazari.