The ground quaked as the Dark Knight wrought his evil spells upon it, molten lava streamed forth scorching the grass and everything else around the gaping pit in the earth. In the depths if the earth’s blood could be heard a faint moaning which grew louder every passing second. A form emerged from the fiery depths. Nothing but burnt flesh and bone was the figure that stood upright before its master while peering around its new surroundings through hollow eye sockets. Three more of these foul creatures emerged from the ground all awaiting the bidding of their master” so the ancient texts read.

Once again Kelras has preformed this vile act upon the nature of our world. He has again risen the KnightMage. Many a warrior lost their lives while attempting to stop Kelras from working his magics, but their deaths were in vain and quite late. By the time the warriors had arrived at the valley of dungeon Wrong the KnightMage had already been risen and the undead followers of Kelras readied for the fight.

Several warriors say that Kelras himself was at the battlegrounds over-looking the carnage his lesser minions brought down upon the brave fighters. Some say that they attempted to attack Kelras but again the spells cast upon him seem to just be absorbed by armor he wore, thus leaving the Dark Knight unscathed. Hand to hand combat was out of the question for Kelras stood atop the mountain cliffs where no sane warrior would climb or surely fall to his death. 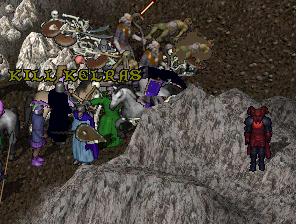 After the battle ended several of the warriors were kind enough to escort myself to the rips that had been formed in the earth. Darkfire burned around the pits driving all whom approached backwards or be scorched from the intense heat. I thanked the warriors and hurried back to my library to continue researching the whereabouts of the magic spring. Dark days draw closer, we must be ever aware of the power this Dark Knight possesses and now that he has his KnightMage by his side I fear we shall not survive his wrath. I see my dream once again unfolding, this time in reality.