An elite detachment of rangers was recently dispatched to discover the nesting site of the ill-tempered dragon that has caused so much damage to residential areas in recent weeks. Today, this team has reported that the beast nests near the stone bridge on the first level of the Fire Dungeon, in the Lost Lands. The nest is described as a simple dugout filled with hay, with animal carcasses and human remains piled around it. It is generally believed that it is in the best interests of public safety to hunt down and slay this beast before it does any more damage to life or property. It is believed that the dragon is passive while nesting, so travelers in the fire dungeon should not fear it unless they attack it directly. 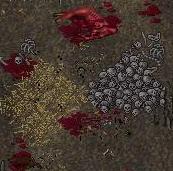 The Dragon typically returns to its nest around 7:30 PM (Pacific Time) and rests for thirty minutes to an hour before leaving to hunt again.