Today, in the City of Britain, Trammel facet, the Britain Cemetary was invaded by hordes of undead. Witnesses say they came in droves. The Citizens of Britain did well in defeating them as fast as they arose from the grave. After much bloodshed, the Undead were no more - or so it seemed. As a group of Citizens waited to be sure they had been forced back into the depths of the abyss, a lone Lich Lord appeared saying, "I will be back! You have not won!" and then disappeared. 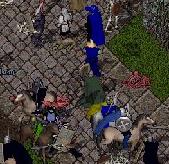 After much speculation and searching of the graveyard, they could not find any trace of this lone Lich Lord. Will he return? Only time will tell. A group Britain Citizens have set up a watch over the graveyard just in case. We will keep you informed of any other news as it develops. Safe Journeys.