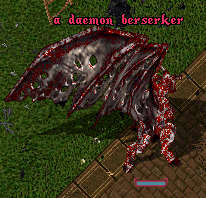 Daemon Berserkers were among the most feared creatures during the Magincia Invasion and Moonglow Rift Event. They are extremely hard hitting opponents who are vulnerable to Power, Vanquishing, or Mystic weapons. If you do not wield such a weapon, the damage is negligible. Towards the end of the invasion, Rift Guardians summoned untold numbers in defense of their corrupted moongate.