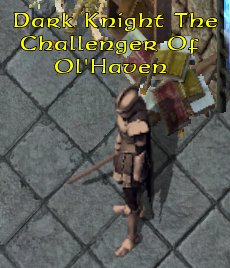 The Dark Knight was once the mage Uzeraan, who, having lost everything in the destruction of Old Haven, stands now a tortured soul forever bound to the dead city. His quest for vengeance, the hatred that forged his fate - all were woven into the shell that survived his battle with the great daemon once bound in his own home.

Now cursed, he is compelled to fight beneath the ruins with any who dare challenge him. And while he cannot escape his fate, neither is he mindless of it.

Those who create a new character while using the Kingdom Reborn client are granted a special rune (titled "The Darkness") which can be used to battle the Dark Knight. Although they will need to gain some magical skills before they are capable of activating it, this is by no means a bad thing - the battle is well beyond the abilities of an untrained or unequipped player. Only the character who initially received the rune may use it.

Using the rune sends them to a small chamber where they wait in line to battle. Once the combat arena is free, they are then teleported to the Knight himself.

Upon the landing of a blow that would kill one fighter or the other, the player is instead teleported away. If the player wins for the first time, he or she is randomly rewarded one of three possible items - an Echo Staff, Ring Of The Servant, or Skill Tutor Statuette.

If the player wins the battle there is a three day wait time before it can be repeated, otherwise the wait is only one day. Regardless just one item can be earnt per character.

Failing to an attempt to Recall using the special rune, or failing to beat the Knight on your first attempt, frequently makes the rune unusable. There is no fix for this; as only one rune can be acquired per character, the only way around it is to create a new one using the KR client and start from scratch.