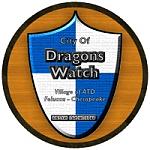 (1998-present) Dragons Watch is located on the Felucca Facet of the Chesapeake Shard of Ultima Online. It is a city within the PaxLair Statehood.

Dragons Watch, Felucca is located on the Chesapeake shard, North of Minoc on a peninsula. (138 26N 129 26E) The Army of the Dragon guild (ATD) where the original founders of the town which started on the Island town of Ocllo. (circa 1998) John McBain the founder of ATD along with Cloud Barret and KingID moved to the present location after houses by members of the guild where placed there when Ocllo became too crowded. You could always find the members of ATD and others sitting at the Ocllo Bank.

Dragons Watch became a part of PaxLair on Aug. 19, 2004. The Citizens of Historic DragonsWatch guild (DWxC) was founded by John Mc Bain and Benris as the government for the city. (circa 2006) NANOC became an Alderman of DWxC in June of 2006 and was promoted to Viceroy by Mayor Winfield after Benris left the realm.