On January 19, 2009, a small event took place originating in New Haven on the Chesapeake Shard.

After several in-character events, EM Dudley stopped to talk to several of the players who had participated previously. Evinryl of DWxC provided him with several pans of cookies, which he seized immediately. While showing off his special EM powers, Dudley vanished, and when he reappeared, he was missing his trademark purple jester hat. 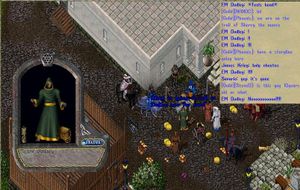 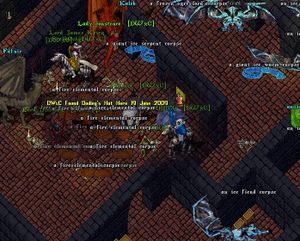 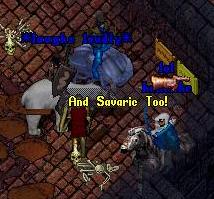 After thoroughly questioning the distraught event moderator, the players learned that he went *POOF* to a place that was dark and cold, and where he could hear monsters.

By following a trail of cookie pans, the players were led to the bottom of the Ice Dungeon, where a massive gathering of Ice Fiends awaited them. Wielding sword, spell, and dragon, the players battled through, and found Dudley's hat, lying just beside the swirling death vortex in the middle of the large bloody pentagram in the center of the room.

The players called for Dudley, and he appeared. After attempting to grab the hat, though, he found that it was frozen to the floor. So, he summoned a dozen or so fire elementals to thaw it. A quick battle, and the hat was recovered, safe and sound, and returned to its rightful place, right on EM Dudley's head.

In commemoration, Dudley placed a plaque stating "DWxC Found Dudley's Hat Here 19 June 2009", since all but one of those present were members of the guild Dragon's Watch. While congratulating each other and having fun, someone noted the one non-guild member present, and the now-invisible Dudley presented that person with a special plaque all his own: "And Savaric Too!"

Both plaques are still visible in the third level of the Ice Dungeon.