Forged Metal of Artifacts aids in the crafting of items. When a charge is used(by double-clicking it) all crafting skills are boosted to 100% for a single crafting attempt. It is available in 5- and 10-charge versions.

Editor's Note: It is not yet 100% clear if this simply means the effect confers GM-status on crafting attempts or an automatic success on the next attempted crafting effort. So far, it seems to be meant for guaranteeing Enhancing attempts only, though further research is likely needed.

While of little value used with crafting base skill items, the Forged Metal of Artifacts could be of great import when attempting higher-ended crafting, such as with Imbuing or Enhancing. The item's effect could ensure success of difficult to craft items as well as saving on the cost of high-priced resources sometimes lost from normally failed attempts.

It is only available via the Origin online store where a code may be purchased to redeem in-game for a token. Using the token gives the player the item which may then be used, stored or traded.

Double-clicking the tool presents a warning message, show below. 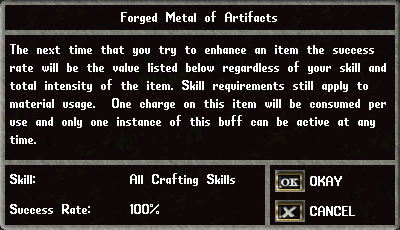 Upon accepting the warning, an aura is conferred on the character, similar to using a powerscroll, and a system message is appears:

"A magical aura surrounds you and you feel your next item enhancing attempt will most certainly be successful."

On the next Enhancing attempt, a slightly modified(showing success rate) Enchaning queue message is given:

"Target an item to enhance with the properties of your selected material (Success Rate 100%)."

After the Enhancing attempt(or if you change your mind and click the tool to remove the Enhancing guarantee buff), the following message is given:

"The magical aura that surrounded you disipates and you feel that your item enhancement chances have returned to normal."

Note: Buffing up with one of the charges, then deciding to cancel the buff does not return the charge to the tool, the charge is lost.

Retrieved from "https://www.uoguide.com/index.php?title=Forged_Metal_Of_Artifacts&oldid=56655"
Britannian Date May 63, 407