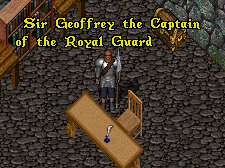 Sir Geoffrey the Captain of the Royal Guard

Geoffrey is a figure from the history and mythology of UO and the Ultima games before it.

He was a fighter from Jhelom, and embodied the Virtue of Valor.

An artifact that honors him, Geoffrey's Axe, is obtained as a reward for the Vesper Museum Collection.

He has also appeared on some shards in the EM-run event enacting the death of Dawn at the hands of Virtuebane.