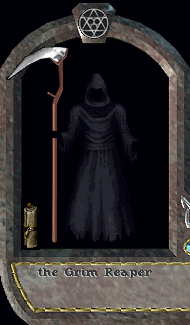 The Grim Reaper was a special monster spawned during Halloween 2006. He would appear in a Champion Spawn-like fashion in Graveyards. Undead creatures would spawn with red names and players would have to kill them. When enough were slaughtered, the Grim Reaper would appear.

Once the Grim Reaper targetted a specific player, they would be followed until death. You could not escape by hiding or recalling, he would follow you anywhere. Upon death one random player would recive a cursed doom major artifact or the Grim Reaper's Scythe in their backpack.

Due to his human form, the Grim Reaper could not be targeted with Animal Lore.

There were some changes after the original introduction: