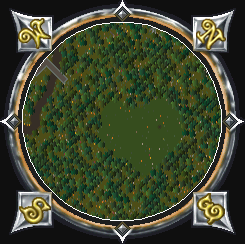 The Grove of Love in Radar view

The Grove of Love is an interesting, heart-shaped clearing in the forest northwest of Britain, just west of the mountains. To reach it, head west out of Britain, then turn right (north) at the first fork towards Yew and then head a bit east into the forest when reaching the guard post overhanging the road.

On many shards, the clearing is dominated by a Keep as that is the largest player home which will fit there.

In the past, it has been the site of many role-playing weddings or other events due to it's unique shape.

Nearby points of interest include such delightful picnic spots as the Yew Lich Ruin to the north, Brigand Camp to the southwest, Yew Orc Fort to the far northwest.

A local NPC resident is Grizelda the Hag, who lives just to the southeast and begins the The Hag's Assistant quest.