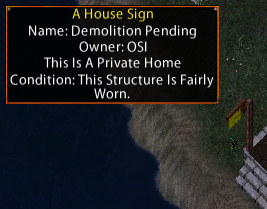 Example of a house in "Demolition Pending" phase

As of Publish 89, Housing Decay has changed to the following information via UO.com:
Condemned Houses will fall after FIVE days unless prevented by vendors. On the fifth day the house will fall between 5-15 hours after the house enters the “In Danger Of Collapsing” state.


In addition to the decay rate, UO released this information Feb 13th, 2015:
When a house goes into the condemned stage the house will go private and all access will be removed.
Trial accounts will no longer be able to pick up loot from an IDOC house
When the house drops "Grubbers" will spawn with some of the house loot in their packs, you will have to chase them down to get the loot they have.
After a house is in the IDOC stage the timers are no longer random, it will drop at either 5, 10, or 15 hours, with the exception of houses with rental vendors. Houses with rental vendors will become OSI owned and have to go through a cycle for the second time to notify vendor owners.


There are 6 stages to the decay of a house in most instances, and possibly 7 in the occurrence of unexpired rental contracts. These stages, in order of their occurrence, are:
1. Like New
2. Slightly Worn
3. Somewhat Worn
4. Fairly Worn
5. Greatly Worn
6. In Danger Of Collapsing
7. Demolition Pending (see notes below)

According to UO-Support page the length of time for a house to decay can vary from 3 to 5 days.

When a house has passed through all decay phases and "collapses", the house and all of the add-ons in that house (ovens, looms, forges, etc) will disappear. Any remaining items in that house will fall to the ground. Clicking once on these items will release them so they can be picked up and moved.

If a house "In Danger of Collapsing" has vendors in it at the time of collapse, it will enter a "Demolition Pending" phase and appear as being owned by OSI. This phase can last as long as it takes for all Vendor Rental Contracts to expire, plus 9 days for the vendor owners to retrieve the items from their expired vendors. During this period, the house decay status may be automatically refreshed several times to keep the house from collapsing. Once these waiting periods have passed, the house will be allowed to decay normally once it goes through its In Danger of Collapsing phase.

Houses that enter this "Demolition Pending" phase have done so after going through a normal house decay process. This is done so that players with vendors in one of these houses will not unexpectedly lose their goods due to the house owners negligence.