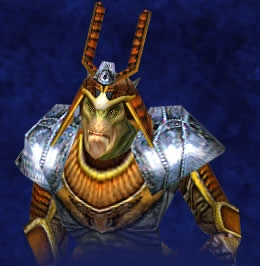 The Juka are an ancient race of sentient, lizard-like humanoids that are indigenous to Ilshenar and that first appeared in 2001 (Ultima Online: Third Dawn). Theirs is a warrior race. According to Floria’s Ultima Info Page, Juka society is built upon a tradition of unshakable virtues: courage, honesty, and a respect for one's enemy. Their very souls depend on a strict adherence to these principles; the Juka call it "the Way". They believe that they are bound for the Great Hall of Honor if they die with distinction or for oblivion if they die in disgrace.

Originally, the Juka were part of Ilshenar's distant past rather than its present. The Juka clans fought each other for centuries until they turned against the Meer and destroyed the Meer forests. The meddlings of Lord Blackthorn and Exodus brought back the Juka race, thus altering Ilshenar's timeline.

While under a massive assault, which was led by the Meer Eternal Adranath, the Juka called out for the mage Exodus to grant them more time, at which point, he cast a spell that transported the Juka, enmasse, through time and into the hands of Lord Blackthorn, who was seeking an army. War on Britannia resulted.

With the exception of "silver" bows, which were undead slayers, there were no slayer bows in UO, until the Juka appeared.

Archers rejoiced! Because among the loot of a slain Juka Lord is the Juka Bow. The weapon can be "modified" by a Grandmaster Bowyer. If successful,

Some of these bows could be "double modified," again due to a bug, to possess double slayer properties. If a Bowyer is lucky and produced a bow with both Demon and Elemental Slayer, such bows do 150% more damage to a Dark Father instead of the standard 100% Damage Increase. This applies only to a Dark Father.

Some people have had limited success in enhancing modified Juka bows to give them properties, but it does not work often and is risky, and hence rarely done. Also, why bother when you can get something from a monster that has mods from the get-go?