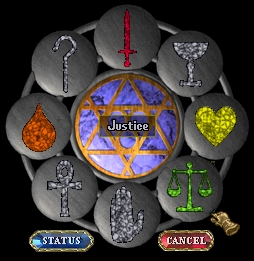 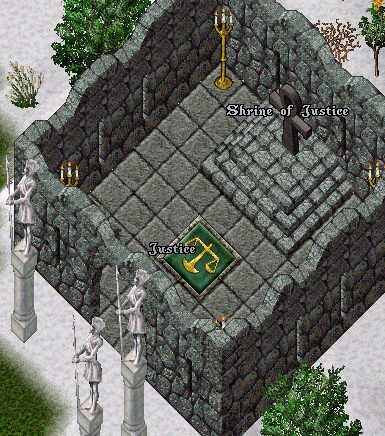 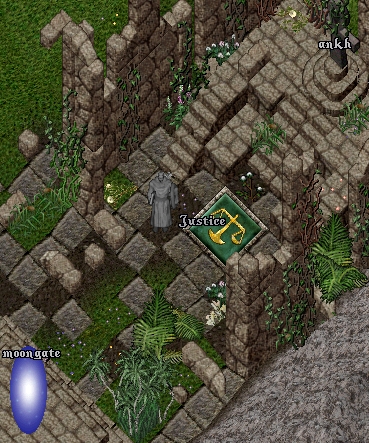 Justice is a: Virtue; a Shrine, and an Ilshenar Moongate.

Justice is one of the virtues for which there is a game mechanic. The only way to earn Justice is through PVP combat by killing murderers. Justice is expended at Champion Spawns to increase the number of Power Scrolls that are awarded.

Justice is awarded to the person who delivers the killing blow to a murderer, or red, character in Felucca. There is a timeframe of 5 minutes between being able to receive Justice again. This is to prevent people from "farming" Justice by continuously res-killing a red.

The amount of Justice gained from each kill varies with the amount of skill points of the killed character and the level of Justice their killer is currently at. After each kill, a message stating "You have gained in Justice" will be displayed. Once you have fully maxed out the number progress points you can earn a message will be displayed stating "You cannot gain more Justice" which for Justice is two kills past reaching the Knight level.

The maximum number of scrolls that can be received from the Champion is 12 (6 from the Champion itself, 6 from Justice protection). The protection system is used in the vast majority of Feluccan Champion spawns as a way to maximize the profitability of a spawn. Felucca champ guilds often consider receiving 12 scrolls as the mark for a successful spawn. It is virtually unheard of for established guilds to use anyone below Knight of Justice for the protector. Protection scroll distribution is a spot of contention in many guilds. There are many different methods of scroll distribution with many people trumpeting the benefits and disadvantages of their own.

It is a common misconception that the protection scroll will be a duplicate of the recipient's scroll, at least in intensity if not the covered skill. This is not the case. The scroll received by the protector is random.

The shrine is located on the main continent (87°17'N, 1°45'W). It is a fully functional shrine; a character may lock his or her karma, be resurected, or even tithe gold there.

Wearer of the Ankh Pendant who chant the word "Beh" at the shrine will receive an increase of +1 Mana Regeneration and +1 Hit Point Regeneration, with a 50% chance to get one of those further increased to +2 for one hour. A character need not continue to wear the pendant to maintain the increase for said hour.

According to Ultima V, justice is Truth tempered by Love. Lord Blackthorn perverted the Virtue to read "Thou shalt confess to thy crime and suffer its just punishment, or thou shalt be put to death."