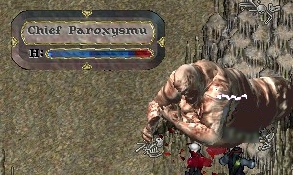 Chief Paroxysmus is a Peerless found in the Palace of Paroxysmus dungeon introduced with the Mondain's Legacy expansion. It appears to be based on the grotesque crime lord Jabba the Hutt, from the Star Wars films. It "eats" pets and summoned creatures, thus restoring itself to full health almost instantly, even from near death. It leans heavily on poison-based attacks.

A gigantic king, ruling from the underworld has returned to the surface bringing the four D's with it - Death, disease, disruption and disillusionment. His breath kills all flora and fauna in his wake. His skin leaks poison, his heart is pure ice. Everything in his path dies.

Each ML peerless will drop 8 mixed items (total) from the following group: