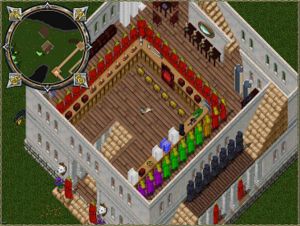 This vendor house / museum (formerly named the "House of Furniture") has found itself in many different locations, but it's always been run by myself. It was established in 1998 as a small marble workshop in the fields of North Minoc. In 2003, it later moved to a 15x13 on the Crumbling Continent during the land rush of Malas. In 2004, I soon found and purchased a more suitable 18x18 plot just outside the West Gate of Luna and it stands there to this day.

Selling crafted armor, weapons, but mostly furniture, it was my main source of income from the start. I later gave that up after my crafter (Special SixtyNyn) was paged on for having an offensive name by another player. After all that, it only took a single person by the name of Lady Reba to be "extremely offended" by my name on a Sunday afternoon while vendor shopping. A crafter without the name & reputation they've built upon is no crafter at all. I gave up seriously maintaining the House of Furniture and that was the end of that... But maybe it was time to move on? Due to inflation and a lack of newer players, selling furniture has become more of a hobby than a serious source of income.

Today it now serves as a museum of treasures I've stolen and looted from other players. These treasures are the same that I've stolen through the years in "The Mis-adventures of Chad Sexington." Some of the treasures I sell (occassionally back to the player I stole it from) but many of them I keep and put on display. These treasures include power scrolls, weapons, armor, jewelry, books of truth, scrolls of alacrity, blackrock, talismen, 10th anniversary items, boats, tokuno major artifacts, and cursed & non-cursed artifacts.

The best part about this museum and the items inside are the stories behind each of the items -- captured in screenshot form.

The museum is still growing.

The vendors in the hooded robes on the outside of the house sell jewelry, weapons, and armor. I still sell furniture (for sentimental reasons) on the vendors indoors... but the rate in which I re-stock them is suspect. The 3rd floor has a public library which includes public rune books as well as player written books.