What was once simply known has Haven, most of which is now destroyed or has sunk into the great sea. The catastrophe occurred soon after mysterious traders appeared all over the island collecting Blackrock. The city of New Haven appeared as quickly as the old one was destroyed. 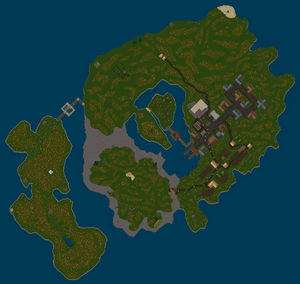 A map of what Haven used to be. Click the image for larger version.

Haven is a bustling city located in Trammel on the same island that hosts Ocllo on the Felucca facet. This island community is known for its hospitality and peaceful surroundings. As a result of this, Haven is a gathering point for adventurers that are new to the realm. Should a new adventurer find themselves in need of help, there will most likely be a fair number of veteran warriors around willing to offer their companionship and advice.