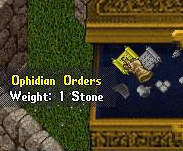 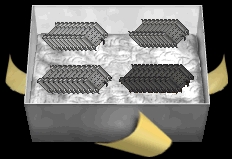 The Orders were of little value until early May of 2008. At that time the Orders were included in a Turn-In event dubbed "the first round of Spring Cleaning collections and rewards." Ophidian Orders were worth 250 points, per.

To redeem Ophidian Orders for reward points, visit the NPC Makiko the Samurai who is located on the 1st floor of the Rokuon Cultural Center, which is in the City of Zento on Makoto-Jima of the Tokuno Islands group.