Mutation Cores are obtained from Plague Beast Lords, in a rather unconventional manner: Cutting the beasts open, and solving a puzzle that consists of messing with their guts.

They were first used during the climax of the Plague of Despair scenario, though now they are a component required to activate a Strange Contraption located inside the Solen Hives. 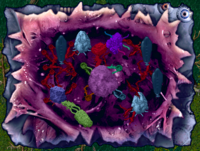 Inside a Plague Beast Lord

Before beginning, first you must find a Healthy Gland. Dependent on luck these are not always required, but until you've got the hang of things it may be best to carry a few with you. You will, on the other hand, always need some Scissors, Bandages, and a bladed weapon.

Locate and isolate a Plague Beast Lord. These can be found in most swamps.

Once you've got the creature all to yourself, Paralyze it - This will (temporarily) make it invulnerable as well as immobile.

Use a bladed item on it to open it up. From here on you have a limited amount of time before it dissolves away.

Locate all pods of this appearance and double click on them. Do not play with their contents yet.

Next use Scissors on every pod that looks like this. If a pool of blood appears when they open, immediately apply a bandage to it. As the cutting process takes a second or two you can ready the bandage targeting cursor while waiting for the contents to be revealed.

Cut the veins leading to these organs that do not match their color. When you've done them all their centers will burst open and you will need to bandage another pool of blood.

With any luck by now you will have four brains displayed within the various pods you've opened. If not, you'll need to cut this blue one open as well: Remove the infected gland within to a different location in the beast (anywhere will do) and put a Healthy Gland in it's place.

Shortly the attached pod below will change colour and open to reveal the fourth brain:

Now that you have four brains revealed, move each to it's corresponding indent near the large central pod. As you remove each brain from it's initial location a pool of blood will appear, so quickly apply a bandage to each as you progress.

Once you have enough brains linked to the center it will burst open, and you may cut the core free.