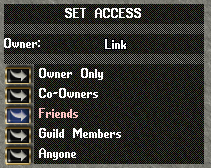 An item secured by Link and set to Friends

For containers and some other usable items locked down in a house, you can set who has access to use them. When a container is initially Secured, the Security Settings gump will appear prompting for a selection. If you press cancel or right-click the gump, it will default to the owner setting. You can change the settings of an already Locked Down or secured item by opening a context menu on it and selecting the "Set Security" option. The name of the person who secured the item will appear along with a list of possible security settings. The current setting is highlighted in pink text and a blue button.

There are five possible settings.

Only the player who secured the item and the owner of the house has access to open/use the item.

Only the Co-Owners and the owner of the house has access to open/use the item.

Friends, Co-Owners, and the owner of the house has access to open/use the item.

Characters that are in the same guild as the house owner named on the house sign may access, even if not friended to the house, provided they hold 'member' rank or above in the guild. Holders of Ronin rank have no access. In this instance all characters on the house owning account are not considered equal. If char A is named on the sign and is in guild a and char B is on the same account but in guild b Chests set 'guild' by character B will not be accessible to other characters in guild b. They will be accesible to chars in guild a

Certain structural elements of a player home may be secured, including doors and teleporter tiles. Using the Contextual menu on the structural element, a Set Security option will be displayed if that element can have security set on it. Selecting it will open the Set Access menu(shown above) where the security level can be set. Of course, disallowing anyone but characters on the homeowner's account and any Friended or Co-Owned characters can be achieved by setting the home's status to Private can done by the homeowner via the House sign. However there are many instances when a player will want to allow access to a home to any player, by setting the home's status to Public, but can still restrict access to certain rooms or levels by changing the security setting on doors and teleporters, especially in homes where Vendors are in use. All doors and teleporters default automatically to Owner Only when a player home is built.

Having items "on display" or otherwise out in the open within a player home must also address security. Containers that are secured within a home will automatically pop up the Set Access menu and default to Owner Only level access. Dismissing the menu without making a selection will leave the default Owner Only level intact. However, certain items generally intended to be used by other players visiting the home require appropriate non-Owner Only settings. Examples include Bulletin Boards, various Dying Tubs and Dyes, some tools and certain House Addons.