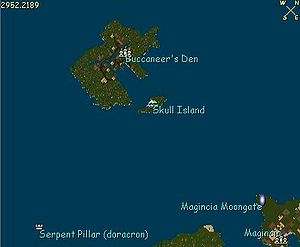 Skull Island is a small southern island located adjacent to Buccaneer's Den on the Trammel and Felucca facets. The jungle island appears to have no plots for player houses. Coordinates: 55° 16'S 112° 42'E.

It is best reached by rune and Recall, Gate Travel, or Sacred Journey spells. However, it is a short sail due east from Buccaneer's Den.