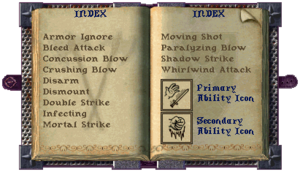 An icon on your Paperdoll will open a book that details each special move available based on your skill level and equipped weapon. Much like the icons in a Spellbook, these can be dragged from the book into the game window and double-clicked to activate the special move. The special moves can also be configured in macros for one-key activation. When activated, the special move icon highlights red, indicating the character is ready to perform the move. At the next opportunity, the special move is performed, and the icon returns to its un-highlighted state.

Special move mana cost can be decreased by having multiples of certain skills. With 200 to 299 combined skill points, the cost will decrease by 5 mana. Having 300 or more it will decrease by 10 mana. The included skills are:

Note - The Human's "Jack of All Trades" racial ability previously granted them at least 20 points in all these disciplines (meaning they effectively had at least 200 points regardless of how their real skills are distributed), but this was removed with Publish 64 in February 2010.

Moves available to basic weapon classes at the time of the Age of Shadows expansion.

These abilities are all based around the Ninjitsu and Bushido skills; you require a minimum level in one or the other to perform them. Which skill is required varies (some moves work with either).

Moves available only to weapons introduced with the Mondain's Legacy expansion. Unlike Samurai Empire abilities, they do not require ML-specific skills to use.

Moves available only to the new weapons associated with the new Throwing skill introduced with the Stygian Abyss expansion.

Special moves were first introduced with the Renaissance expansion. Every two handed weapon of the three fighting skills was given a special ability that had a 20% chance of executing on each blow. The chance of success was increased with more Intelligence. These special moves only worked in player versus player combat.

During the Age of Shadows expansion, the entire system was revamped. Special moves were now a macro that could be used any time a player wanted. They could also be used on both players and monsters. To balance the powerful new attacks, mana was made a requirement. Instead of just 3 moves, 9 more were added to bring the total up to 12. Later on the Samurai Empire expansion added another 10, Mondain's Legacy added 7.