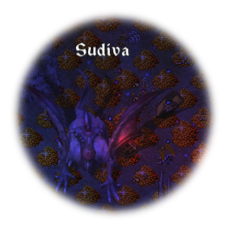 Sudiva is the large dragon that was needed to be sought out in the A True Sacrifice quest. Players who say "cah" twice near her used to give up 30 stat points and receive Sudiva's Covetous-Laced Tear. Although she could be attacked she could not be damaged much and will kill you in a single attack.

Inspired by an idea from Leodegan of Europa and acting on a suggestion from Mirt of Chesapeake, Sudiva Fan Fiction Contest is designed in a collaboration between Bioware UO, UOGuide and UO Stratics, with support from UOForums. The winners are announced in June 2012: