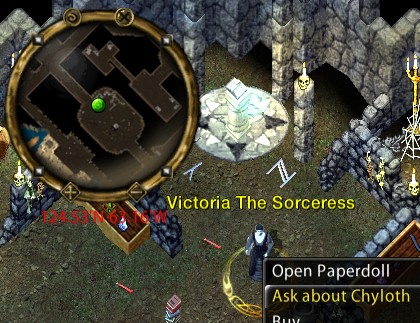 The Summoning is a quest found in the dungeon Doom and begins with Victoria the Sorceress.

Victoria turns to you and smiles...

Chyloth, eh? He is the ferry man of lake Mortis, beyond which lies the nest of the The Dark Father - the fountainhead of all the evil that you see around you here.

800 and some years ago, my sisters and I persuaded the ferry man Chyloth to take us across the lake to battle the The Dark Father. My party was utterly destroyed, except for me. For my insolence, I was cursed by the The Dark Father to wander these halls for eternity, unable to die - unable to leave.

Chyloth usually only crosses over the souls of the undead, but he can be persuaded otherwise...with a token of gold, in the form of a human skull. Such a gem can be found only in the belly of the hell spawn known as the devourer.

You have accepted Victoria's help. She requires 1000 Daemon bones to summon the devourer.

You may hand Victoria the bones as you collect them and she will keep count of how many you have brought her.

Daemon bones can be collected via various means throughout Dungeon Doom.

Once you have given Victoria 1000 Daemon bones, she will not return them to you if you log out or leave the dungeon.

Upon completion, Victoria will spawn the devourer, a Bone Daemon, on the circle of stones east of the room:

Well done brave soul. I shall summon the beast to the circle of stones just South-East of here. Take great care - the beast takes many forms. Now hurry...

I summon forth the forces of evil from the depth of the abyss!

I COMMAND thee to appear!

You need to kill the devourer, Bone Daemon to obtain a Golden Skull:

Go forth and vanquish the devourer that has been summoned!