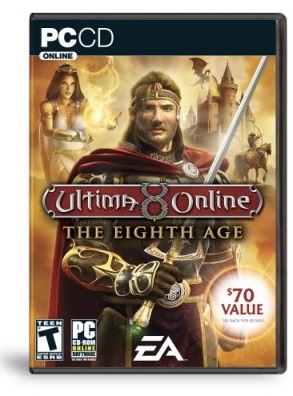 On September 25, 2005, Ultima Online celebrated its 8th year of continuous operation. The date occasioned a box release entitled Ultima Online: The Eighth Age, which had a North American release date of October 18, 2005 and a suggested retail price of $23.25 US. The Eighth Age also could be purchased as a download.

Ultima Online: The Eighth Age brings back the game world that thrives with hundreds of thousand massively multiplayer online (MMO) role-playing fans. Join this gigantic online community and enter a world teeming with adventure. Discover distant locales, battle fierce creatures, and befriend fellow travelers. You can even design, build, and decorate your very own house within the living world of the game. This edition compiles the first 6 expansion packs, with a wealth of new game items and a 45-day free trial for Ultima Online -- it's the best way to discover (or re-discover) the Ultima world!

Those who purchased the boxed version also received, via a special token, one of eight anniversary gifts, a free advanced character, one free shard transfer, a free 6th character slot, an atlas of Sosaria, an Ultima Online Play Guide, and 45-days of free game time. While those who purchased a download received all but the atlas, play guide, and box.