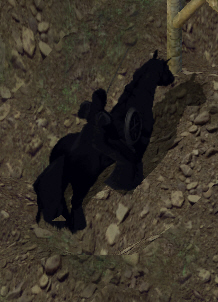 Vanguard Controllers were chiefs of the spearhead forces of the Shadowlords, which attacked various cities during the Summer of 2008 (see Vanguard).

They were humanoid riders on Dread War Horses, and fearsome opponents. They would cast Necromancer spells. Their weapons, known as Obsidian Blades, had an Armor Ignore attack that required no Mana. They wielded a special kind of Chaos Shield.

After a certain amount of damage was done to them, they (or their Warhorses depending on who you ask) could summon helpers, significant numbers of them. See Vanguard for more on the various creatures that could appear.

They would speak various Latin phrases, tell you to "Run!!!" and proclaim "We are Vanguard!!"