An attempt to enter the City of Britain on the facet known as Trammel was thwarted by the citizens of Britain this day.

As I finished my banking on my visit to Britain, I heard the Town Cryer shouting, “To Arms, Brigands invading the pass south of Britain!“ I hurried along with many other brave citizens, taking my shiny new Viking sword with me in hope of helping battle the evil outlaws.

As we came through the pass many younger warriors were fleeing in fear of the band of Brigands, who were trying to kill everyone that came near. They seemed to have an agenda, as I heard them shouting, “Don’t forget to rob them, we need all the money we can get”. Was this just a bandit operation or something more?

We battled fast and furious, yet they kept coming. I myself slew three of the vile men. Our efforts paid off, however, as the large band diminished until there were none left standing. Whoever was their leader either perished with them, or would not be pleased with the outcome of their task. 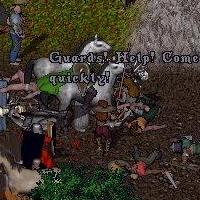 I heard many cheers of success as we all walked back to the city. A few of us went to the Cat’s Lair to have a drink in celebration of our small victory.

It looks as though the citizens of Trammel will need to protect its cities as they once did in Felucca. Safe Journeys, readers, I’m off to watch for more news.