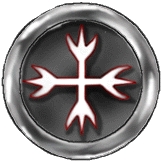 Chaos is part of the philosophical system of Ultima Online and a shrine on both the Felucca and Trammel facets.

The Chaos Shrine is located on the main continent (68°44'N, 9°46'E). It is not fully functional in that a character cannot tithe there. However, resurrection and karma lock are available. Of the shrines, chaos shrine is the only one at which murderers can get resurrected.

It is the location to which ghosts successfully targeted with the Exorcism spell are supposed to be sent. This spell, however, currently is not functioning properly.

The concept of Chaos in Ultima Online was created by Lord Blackthorn the Deceiver as a counter to Lord British's system of Virtues. It stresses individuality and difference. Several in-game books describe the philosophy further.

Some of Blackthorn's writings, for example note "On the Diversity of Our Land," make it clear that Blackthorn would extend fundamental rights to such creatures as Orcs. After Blackthorn turned evil, partially under the influence of Exodus, Chaos took on a more sinister overtone than diversity and difference. It became one of the lack of moral standards, decay, murder, and death.