A new system introduced with the Stygian Abyss expansion.

Chicken lizard will bond to their master like any other pet (after it has been fed at least once, then a second time 7 real life days later). Once the pet is bonded, on the day following the bonding, if the player feeds the chicken again, it will have a chance of laying an egg

. If the chicken doesn’t lay an egg on that first feeding, feeding it further will not yield any egg. Player will have to wait a period of time after the first feeding. The chicken will lay a maximum of 2 eggs a week.

When killing chicken lizards, players have a chance of finding an egg as loot on their corpse.

The egg must be placed and remain inside an incubator for 3 complete real life days to reach maturity. During that period, the player must water the egg once a day so it retains its moisture. After 72 hours, if all steps have been followed, the egg will be ready to be hatched. If the egg incubates for 48 hours after becoming mature, it will burn.

Use a water pitcher on the egg once a day as every time the 24 hour period has elapsed, or it will become dry. If the egg hasn’t been watered for one day, it will be dehydrated on the following day and need to be watered twice to be healthy. Not watering the egg once will not prevent the growth of the egg. If not watered twice, the egg will not grow that day and has a 50% chance of being burnt. It also decreases its chance of yielding a battle chicken. 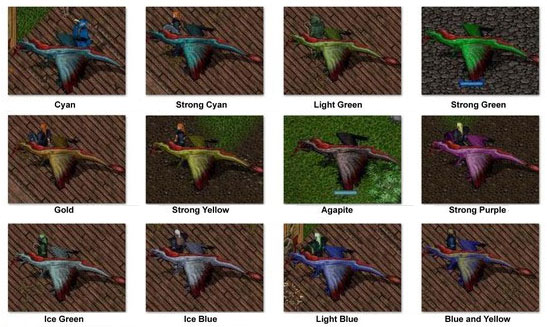 The egg will not hatch on its own. The player will have to double click the egg to break its shell. The egg can be hatched at any growth stage. The player will receive a confirmation gump asking him if he’s sure he wishes to hatch the egg.

If the spawned animal is a battle chicken lizard, it will automatically go vorpal and essentially act exactly the way vorpal bunny does, except slightly slower than the vorpal bunny. Unlike the vorpal bunny, it will not despawn after a few minutes. It will despawn at the normal rate any other untamed or release pets do.

Once the battle chicken is tamed, it loses the vorpal ability and its dexterity is reduced to a standard range.

The coop allows to bypass the use of stable slots as their data & stats stored on the coop.

Pets are stabled and claimed using the context menu on the coop. Player must have proper permission to access this functionality. As long as the coop is empty, any player with proper access can stable a chicken there. Once a pet has been stabled, the coop becomes "bound" to the master and nobody else can stable or claim pets from it. Once all pets have been claimed, the coop bond is reset and becomes available to any player once more.

If a player has stabled chickens in a coop and loses his permissions get revoked, he will still be able to claim his remaining pets stabled within but will not be able to stable any new chickens. Once he has claimed all his chickens, he will no longer be able to access the coop.

The chicken coop is craftable by carpenters with SA entitlement.