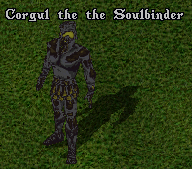 Corgul appears as a black Titan in the Classic Client but has his own unique graphic in the Enhanced client. Corgul hits heavily with both melee and spells. Corgul the Soulbinder has a tainted life force aura similar to Osiredon the Scalis Enforcer which will cause life leech item options/skill(i.e Vampiric Embrace) to work in the opposite way. Players will experience life decrease rather than healing effect that would be normally expected. Mana and Stamina leech work as normal. Corgul is bound to his original position on the island and will intermittently return to that position, regardless of where he is lead.

When first approaching the island, Corgul will be found in the cobblestone center of the isle, while 6 groups of ~16 Soulbound are stationed around the island. The initial 6 groups will always appear in the same locations: N, NW, SW, CenterSouth, S, SE. Three to Five (it's almost always 5) additional groups of ~16 Soulbound will spawn in random locations around the island after Corgul has been injured. It is possible to initiate combat with Corgul, damage him, then retreat and hide, spawning the first group of additional Soulbound. The remaining groups will spawn over short intervals. Alternatively, eliminate the first group of additional Soulbound and the second group will immediately spawn, eliminate the 2nd group and the 3rd group will immediately spawn, etc.

Corgul appears to take less damage for each Soulbound alive, to the point where he is almost impervious to damage if 6 or more Soulbound groups are present. Once all the Soulbound are dead, Corgul is a tough, but straightforward opponent. It is therefore in your best interest kill all the Soulbound before trying to defeat Corgul.

Corgul is vulnerable to Repond Slayer and is a Necromancer, so watch out for Blood Oath.

Corgul has the vortex ability and will pull all ranged opponents to him, including tamers/mages with pets/summons. 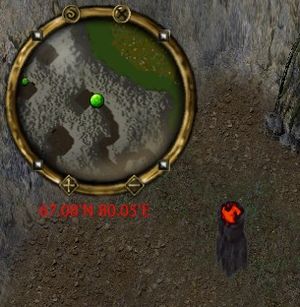 After you reach the destination, move further forward to reach to a remote island. Corgul the Soulbinder is waiting here and guarded by: