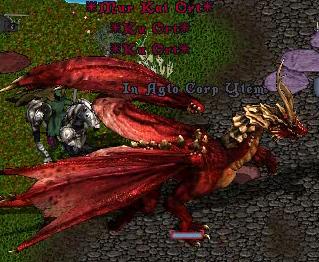 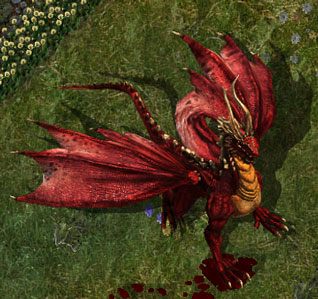 During the War of Shadows Chapter of the Warriors of Destiny event cycle, a Crimson Dragon would appear as a kind of "boss monster" after the spawn had otherwise been defeated. These creatures were extremely powerful. They could turn Dragons wild. Other pets were effective, however.

They would "smack talk" to players, saying such things as the following:

Their attacks were heavily fire-based. Their breath attack did 60 points of damage, minimum, and typically followed another attack. It was rare for a Player Character to survive one of those deadly combination attacks. They could on occasion knock a mounted character off of his or her mount. Their "Vas Flam" ("Rise Flames") spell caused deadly walls of fire to spring forth from them.

The Crimson Dragons bore obvious similarities to The Six, which had appeared earlier in the event cycle.