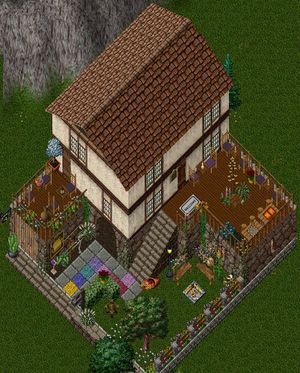 History of the Sword & Shovel

This Tavern was build in the 302nd year after the demise of Mondain (2001) by Cypher Baralis and Ryan Lightblade. It soon became the Center of the just founded Township of Valoria.

After many years of serving and entertaining Citizens, Friends and Visitors, the two Founders retired and gave the Tavern to Bran Gradnak. As the popularity of the tavern grew, he hired several Citizens to serve in the Tavern. When Bran retired, he gave the management of the Tavern to Miss Fiona Windwit, his best barmaid. She made the Tavern even more successful. It had opened on almost every day of the week, and at many days, two or more barkeeps were needed to serve the many quests. Finna Windwit died while been kidnapped out of her Tavern.

In her testament, she handed the Tavern over to the Elf VanQa, who has been a loyal Barmaid for many years. With the Lady VanQa running the tavern, more Elves settled in Valoria and also the Tavern gained a very good reputation due to Lady VanQas kindness and excellent service. She managed to attract folk from all over Sosaria and made the old Sword & Shovel Tavern a famous place.

Soon after the 4th Anniversary, Lady VanQa decided to move on to another place, where she would reach even more people and where she could run a modern Tavern by herself without the restrictions that were written in Fiona Windwits testament. Without a new management and advertisement it became quite in the Sword & Shovel, until Zachariah Creed decided to take care of it. Alas, only a few weeks later he mysteriously disappeared and haven't been seen again. The old Sword and Shovel Tavern became abandoned and its name was forgotten outside of Valorias borders.

Back to the Roots

But the citizen of Valoria renovated the old house as good as they could. With a lot of effort and sponsored gold coins, the Sword & Shovel Tavern finally re-opened and became the place again as that it was once build: A hub of social life in Valoria, for its citizens, its friends and every traveler.