Difference between revisions of "Fire Beetle" 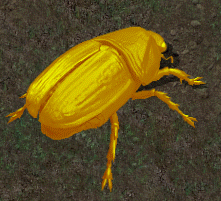 Fire Beetles are similar to Giant Beetles in that they are mounts. However, Fire Beetles are not a pack animal and have no storage. This insect is popular because it is a portable Forge.

Before Taming they are actually rather strong and quite capable of killing weaker characters. If they have a ranged attack used on them they run at Paragon like speeds to catch up with their attacker. They have to have their health taken down until they are "Beaten into subjugation" before they can be tamed. Once this is accomplished, anybody can control the Fire Beetle and ride it. The Fire beetle requires 3 control spots.

The Fire Beetles only spawn at the very end of the Yomotsu Mines, and only one ever spawns at a time. Because the Yomotsu are fairly strong, and the Beetle itself requires an immense amount of skill to tame, they can be slightly difficult (even dangerous) to acquire.

The Samurai Empire expansion is required to use these creatures as pets.

List of Abilities available to a Fire Beetle who has undergone Animal Training.