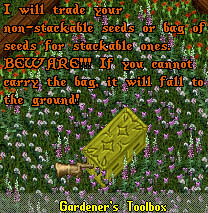 The Gardener's Toolbox is a box introduced with Publish 64 in February 2010 that allows players to exchange non-stackable seeds for stacking ones. The seeds given by the box will be of an identical type of the kind exchanged. The purpose of the box is merely to allow players to stack their seeds and save storage space.

The box is located in the garden of the grand palace at the western side of Nujel'm, sextant coordinates 27o 21'N, 163o 45'E

Place an unstacking seed, or seeds together in a container, into the Gardener's Toolbox. The seed(s) will be converted to stackable and automatically returned to the character's backpack.

Warning - If a character cannot carry the weight of the returned seeds in their backpack, the bag of seeds will be dropped instantly at their feet, free for anyone to snatch up.