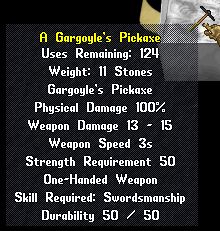 Gargoyle's Pickaxe
The Gargoyle's Pickaxe is a consumable tool used by miners and treasure hunters. It is also a one-handed Swordsmanship melee weapon. The pickaxe has an item property of Uses Remaining; when that value reaches 0, the pickaxe is destroyed.

Every use of a Gargoyle's Pickaxe creates a chance of summoning a hostile ore-based elemental of the same type as the ore vein currently being mined.

The Gargoyle's Pickaxe allows a miner to increase the level of ore found in a particular area by one level. For example, if a mining location yields Verite, the use of this tool will cause Valorite to be the result. Think of it as an ore vein upgrade. The tool can be used in combination with the Prospector's Tool to raise a vein two levels (e.g., Agapite to Valorite).

The Gargoyle's Pickaxe can be earned by completing and returning Blacksmithy Bulk Order Deeds or as random loot on all varieties of Gargoyles.