Difference between revisions of "Giant Beetle" 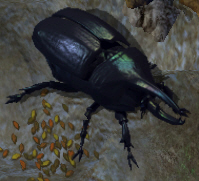 Giant Beetles were first seen in the company of the Solen ants in their hives. It is believed that the ants bred them for use in carrying heavy loads of dirt and rock from their myriad digging operations. Giant Beetles can be tamed and used for this very purpose, much like a pack horse, and can simultaneously be used as a mount if they are not carrying too much weight. The are completely blue in the Classic Client, leading to their common nickname of "blue beetles", which can be confusing to Enhanced Client players where the beetles are black. (See screen shots to the right.)

Before Taming they are actually rather strong and quite capable of killing weaker characters. If they are hit with a ranged attack, they run at Paragon-like speeds to catch up with their attacker. They have to have their health taken down until they are *Beaten into subjugation* before they can be tamed. Once tamed, any non-Gargoyle character can control and ride them. (Gargoyles can own and control them but cannot ride any animals as mounts.)

Like pack horses, Giant Beetles can be used to store items, to a maximum of 125 items and/or 1600 stones. This is on top of their own body weight, so a fully loaded beetle will show a total weight of 1613 stones. They can be ridden while carrying items but will become fatigued if loaded with more than 557 stones (570 stones total weight.) They can be ridden while carrying more weight but only at walking speeds; running will almost instantly cause them to become too fatigued to move. The weight of the rider does not matter, so if enough weight can be moved from the beetle to the rider's pack to get them under 570 stones, they can be ridden at running speeds even though the total weight (beetle + rider) is actually the same. The context menu must be used to open a beetle's backpack as double-clicking will cause the character to mount it.

When properly trained to all GM levels, they can be one of the more powerful pets that do not require any taming skill to own. They require 1 control slots and eat meat. Therefore, if dragging meat onto beetles for storage, they will eat it. Instead, open the backpack and drop items of that type directly inside.

List of Abilities available to a giant beetle who has undergone Animal Training.