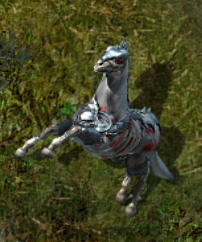 On occasion the Monstrous Interred Grizzle will drop a small statue of a Hellsteed. The one who uses this item will shatter it, releasing the creature which will instantly bond to him/her as a pet.

Although the grizzled version shares the vital statistics of any other Hellsteed (or is it a Skeletal Steed? I see the resists differ between the two), it has a special quirk - Unlike the other undead mounts (which any Necromage can temporarily summon via the Animate Dead spell), they will not lose their Hit Points over time. It is also impossible to bond with those creatures summoned via the spell.

Prior to Publish 52, a bug existed where mares "summoned" by activating the statuette could be dispeled (permanently!). Unfortunately, this still applies to all such mares obtained prior to that publish.