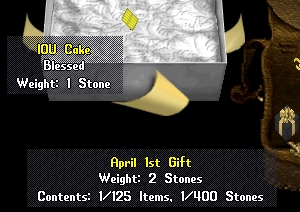 Whether in-game or out, Holidays are festive times. Generally speaking, holiday gifts, if any, are distributed to all characters with an account age of 30 days or more that log into the game during a set period of time. In 2008, a character only received a Valentine's Day gift if they logged in on February 14th, but characters had more than a week to log in to receive the 10th Anniversary gift. Sometimes an entire shard is dedicated to a holiday. There have been three retail box releases in celebration of the UO anniversary (i.e., 2004, 2005, and 2006). Several holidays are observed in UO: