Difference between revisions of "Ilshenar" 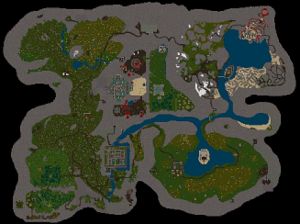 Ilshenar is a continental landmass of the UO universe that was introduced with the Third Dawn expansion. Originally one could visit Ilshenar only while running the 3D client. With the Blackthorn's Revenge expansion, users of the 2D client were allowed to access Ilshenar.

Ilshenar remains unique in the fact that it is the only facet you can not Gate Travel, Recall, or Sacred Journey into. Gate Travel cannot be used to leave Ilshenar, but the other travel spells can. Other than this, Ilshenar mostly follows the Trammel rules set.

Ilshenar has been described as "one big dungeon," because with few exceptions it exists to hunt monsters. Paragon creatures spawn in Ilshenar, along with the minor artifacts that are rewards for killing paragons. While there are Champion Spawn locations in Ilshenar, Power Scrolls do not drop. Activity at all of the Ilshenar Champ Spawns is up since the introduction of Champion Spawn Artifacts and Scrolls of Transcendence. There continues to be a Champion Title reward system as well.

The lore of Ilshenar has changed since the map was introduced.

For the original backstory, see BNN: An Introduction to Ilshenar - Part I. This history revolved heavily around the abilities of ancient Ilshenarians to travel easily between facets and even potentially between shards. However, this lore was erased, with the fictional explanation being that Lord Blackthorn and Exodus had altered the timeline by bringing the Juka race into our present.

Some have suggested that the spell travel limits to and from Ilshenar and the suggestions of shard travel indicated that Ilshenar was intended to be an area where players from different shards could interact. Originally, global interaction was a major marketing point for Ultima Online. Language translation software was provided by SYSTRAN and real-time translation options were included in the 1998 expansion, Ultima Online: The Second Age. Needless to say, Ilshenar presently does not allow characters from different shards to interact.

Only those locations with NPC vendors are included here.

Other Points of Interest