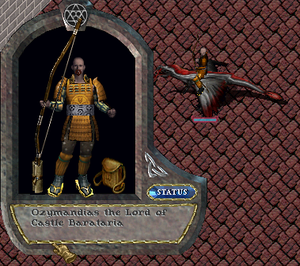 Ozymandias is the feudal Lord of Castle Barataria and one of the four Legends encountered on the rooftop of the Shadowguard. He is a proficient archer who rides a lesser Hiryu. In addition to his dismount ability, he randomly summons the aid of the Tsuki Wolf, Lesser Hiryus and Elite Ninjas.

As with all bosses in Shadowguard, additional creatures are only spawned if the player has hit Ozymandias a set amount of times. If killed with nothing but pet damage(only tested on tamers), while slow, there will be no creatures & one can Word of Death from 25% to death. Starting Word of Death at 30% typically spawns a set of creatures on death.