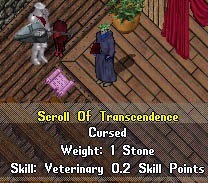 A Scroll of Transcendence.

are introduced with Publish 73 which can hold up to 300 of any type of SoTs. For scrolls of alacrity storage options, see Scrolls Of Alacrity Book.

The scrolls can be obtained by fighting monsters at Champion Spawns in either Felucca, Ilshenar or the Tokuno Islands and drop randomly into player backpacks. The skill on the scroll is randomly selected. The number of points per scroll range from 0.1 to 0.5 in Trammel ruleset areas, and from 0.6 to 1.0 in Felucca.

No scroll for you!

The scrolls spawn for all skills, including skills not available for Powerscrolls such as Begging and Remove Trap, among others.

As Meraktus the Tormented is not a standard champion spawn (no altar), no scrolls can be obtained from working that spawn.

With the Ultima Online: High Seas Expansion you can also acquire them by doing the spawn around Corgul the Soulbinder, following the same rules like Champion Spawns. In Felucca you can also use Justice's Protection.

A Scroll of Transcendence is used by double-clicking whereupon a dialog box will appear prompting the character for confirmation. When consumed, this cursed scroll will allow players to instantly train their character in the skill and by the number of points indicated on the scroll up to their Skill Cap.

There is no timer on using these scrolls and the effect is instant.

Attempting to use a Scroll of Transcendence over a character's skill cap will yield the following message:

You cannot increase this skill at this time. The skill may be locked or set to lower in your skill menu. If you are at your total skill cap, you must use a Power Scroll to increase your skill cap.

You are already under the effect of an accelerated skill-gain scroll.

For the short time between the introduction of Scrolls of Transcendence and Publish 58, the effects of the two types of scrolls(Transcendence and Alacrity) could be stacked for instant and fantastic amounts of skill-gain.