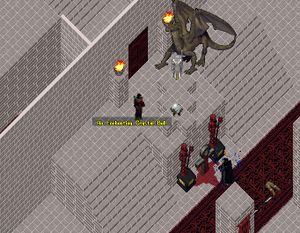 The crystal ball gives you access to the Shadowguard rooms.

The Shadowguard is a series of encounters found at Minax's fortress in the Valley of Eodon. A single player or party can attempt to defeat the challenge. There are five rooms which have special conditions to complete. Double-click the enchanting crystal ball in the grand hall to open the rooms gump. It shows your current progress and allows the selection of encounters.

To enter as a group you must form a Party. Only the party leader can use the crystal ball and select which encounter you will go to. Room difficulty is increased (more monsters) with the more party members you have.

Once you enter a room, there is a 30 minute time limit to successfully complete the room (does not apply to the Roof). When the time limit is reached, all players in the room will be teleported back to the fortress near the crystal ball. You will also be teleported out if your entire party dies. There is an Ankh located next to the exit location that can be used to resurrect after a failed encounter. If for any reason you wish to exit a room without completing it, open a Contextual menu on your character and click 'Exit Shadowguard'.

You are transported into a bar with tables and ale left all over. Four waves of pirates will spawn. They have they same reflect damage as Executioners. You can fight them normally but there is also bottles of liquor that spawn on the tables. Place a bottle in your backpack and double-click to throw them at the pirates. If a throw is successful it does 300 damage. Four bottles will defeat a normal pirate. There is a chance to drink the bottle or have it break in your hand and damage yourself. The bottles randomly respawn and have a Lifespan of 60 seconds.

After the normal pirates are defeated, Shanty the Pirate will appear. While he is stronger and faster than the initial spawn, he does not reflect attacks. The bottles of ale can still be used on him. 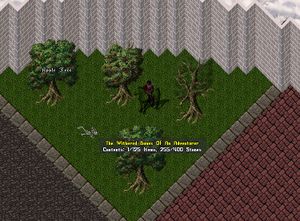 A tranquil orchard until you start picking apples.

You are transported into a courtyard with 16 Apple Trees. In the northern part of the area you find the withered bones of an adventured. On the corpse is a tattered book that reads:

"I've finally found... this vile orchard is the key to Minax's enchantments!... days I've spent trapped within this tower, I dare not pick the fruit from the foliage for I know not the consequences may... Hunger is building... so hungry I must... Blech! Vile fruit!... What's This? For when I tossed this vile apple from whence it came a horrific beast appeared!... for I hope I can fight it..."

The goal is to destroy all the trees. To pick an apple double-click the trunk of a tree. The apple will appear in your backpack with the name of a Virtue or a Dungeon. The apple has a lifespan of 30 seconds and must be thrown at the opposing alignment tree. Each tree is randomly assigned to represent a virtue or dungeon. Double-click the apple and throw it at a different tree (target the trunk). There are two possible outcomes:

The rooms and halls here are lined with armored statues. After a few moments Ensorcelled Armor warriors wielding Halberds will begin appearing inside the rooms.

Most times when an armored warrior is defeated, it will drop a black bottle on the ground named a Corrupt Phylactery with a lifetime of 60 seconds. Pick up the bottle and take it to the center of the halls with the braziers that have special Purifying Flames. Double-click the bottle and target the flames.

You will now have a Purified Phylactery in your backpack. Go up to one of the golden Cursed Suit of Armor statues, double-click the purified bottle and target the statue (easiest to target the statue base). The statue will be destroyed. Do this to all the golden statues to complete the encounter. 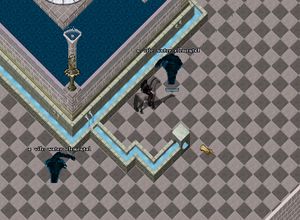 Someone needs to call a plumber.

This grand fountain needs to be drained, it is overflowing and creating Vile Water Elementals. When killed they leave behind Canal pieces of various shapes on the ground. The goal is to create a canal between the four gold Spigots on the fountain and the drains scattered throughout the room. Place them in such a way as to create a way for water to flow from the spigot to the drain.

Once all four spigots are emptying into drains, the fountain will run out of water and the room is completed. 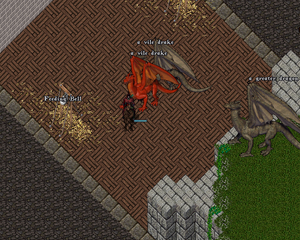 You must figure out how to reach the Greater Dragon.

The first thing you will notice is the Greater Dragon perched atop the center platform. Beware, as it will breathe fire and cast spells down on you. There are a pair of Feeding Bells on both the west and east ends of the area.

Double-clicking a Feeding Bell will summon Vile Drakes. When killed there is a chance that a Magic Drake Wing can appear on their corpse. Using this item a single player can be transported up to the platform to fight the Greater Dragon. The wing only has a lifespan of 1 minute so it is not possible to stock up on them and have everyone go at the same time.

The Greater Dragon of this area is no ordinary Greater Dragon, as it has around 10,000 hit points. Periodically during the fight the dragon will randomly push a target (player, pet or summon) off the ledge. If this happens to a player they will need to find another drake wing to use.

Once all five rooms have been successfully completed The Roof can be entered. The final encounter is a large open room with a small balcony in the center. The enchantress Minax stands here next to a corrupted time gate which is used to summon her four lieutenants to battle. While she will taunt and target nearby players, she cannot be harmed and does not participate in the fight. 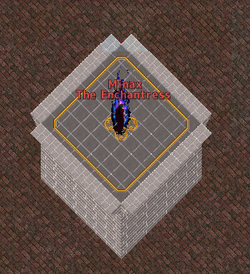 Upon arrival, each party member will see some taunting by Minax before she announces which lieutenant is summoned to fight first. The chosen order of the four is completely random and all four must be killed for the encounter to be considered successful. Remember, there is no time limit during this final battle.

The four Lieutenants or 'Legends' to defeat are:

After the final lieutenant is defeated, Minax will curse you as the time gate explodes, vowing her revenge to another day. A gold explosion will happen, similar to a champ spawn - as well a large amount of high level items that drop on the fourth boss' corpse.

Keep in mind, you only have 5 minutes to loot the boss and gather gold!

A player has the chance to receive one of the following artifacts in their backpack upon the death of the final legend of the roof encounter.